The Grand Palace in Bangkok

Bangkok’s Grand Palace is one of the main tourist attractions and was the first place on our list for our 3 day stop over.

We were staying in the Royal Orchid Sheraton Hotel & Towers which was on the Chao Phraya River and set out quite early.  There was a river pier just next door where we grabbed the ferry bus heading towards the palace area which only took about 10 minutes and was far more pleasant then going by road!

We reached the ferry terminal at The Tian Market and wandered into the old town.  The palace wasn’t open yet but we wanted to find a massage parlour and I’d read that a good way to do this was to find a massage school which was better value.  The Wat Pho Massage School was somewhere nearby but it took us about 30 mins, several interludes with passers by and many about turns before finally identifying a small green doorway down a side street that marked the entrance.

It was all a bit confusing but they seemed to understand why we were there and without much of a discussion, we were led up to a large room where about 30 mattresses were lying in neat rows side by side.  We were the only ones there except for two Thai women who would be giving us our massages.  A ring curtain in the middle of the room served as a changing room for us to get robed in some Aladdin-esque garments before being directed to adjacent mattresses.

We got pummeled!  I enjoyed the experience but there were times when I thought my body wasn’t designed for everything they were doing!  We both walked out rather shell shocked but certainly more supple than when we entered.  It was a good prelude before heading over to the palace.

The Grand Palace is a large complex of temples, living quarters, gardens and other buildings that served as the Siam King’s primary residence between 1782 and 1925.  It is surrounded on all sides by a high white wall with several entrances.

We had heard of a scam which seemed a bit odd whereby someone would befriend you, inform you that the palace was closed for maintenance/public holiday/etc and then offer to take you to another special place which was still open (and get some cut of the fee or a tip).  We already had one person try this with us on the street as were walking which we politely rebuffed feeling good about ourselves  But when we got to the entrance gate, the guard at the gate turned us back saying the palace was closed.  They didn’t try to offer us a trip anywhere else so after a few rounds of questions – we decided to try visiting another temple nearby.

It didn’t seem right though so after mulling it over still further, we decided to try our luck at another gate.  A lo and behold, with the next gate, we went straight through.  Not sure what happened at the first one – perhaps some scam too clever for us or maybe just some misunderstanding.  Who cares – we were in.

Within the tall white walls lay a tapestry of stunning buildings with intricately sculptured roofs and pillars with brilliantly coloured tiles and decoration.  The grounds were a perfectly manicured collection of trees and statues lining the walkways and little bridges.

There was lots to see with some show pieces such as the Temple of the Emerald Buddha but we decided just to follow our noses, explore where door ways led and we found ourselves in quiet courtyards away from the already growing crowds. 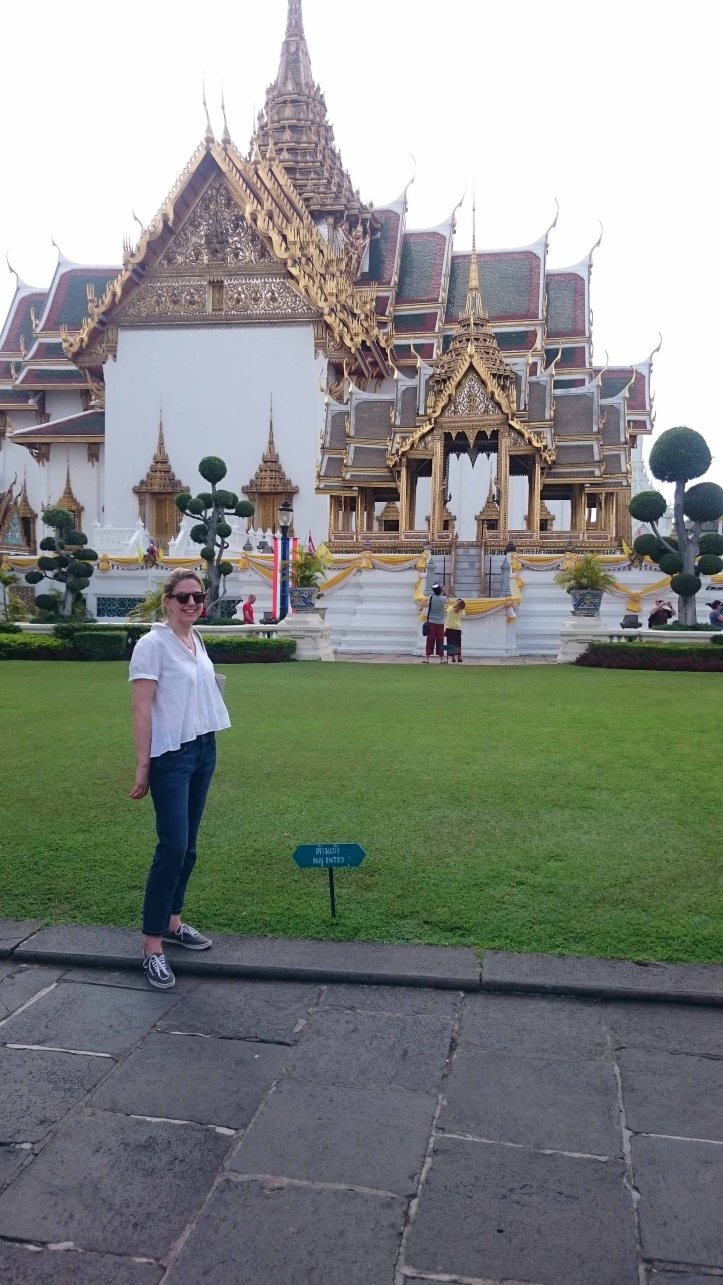 We continued walking around and there was so much to see – far more than we probably wanted to see all in one day (I can only take so many temples at once!).  The insides of the temples were cooler and some provided quieter places to relax for a while and enjoy the tranquility.

After the Grand Palace, we walked around the central streets of Bangkok exploring China town, some other temples which were all interesting in different ways.  I think our most enjoyable time was sitting listening to the teachings (not that we understood the Thai language) of one holy man to a visiting class of school children.  It was just very peaceful and a chance to contemplate how lucky we were to be in a beautiful city like Bangkok. 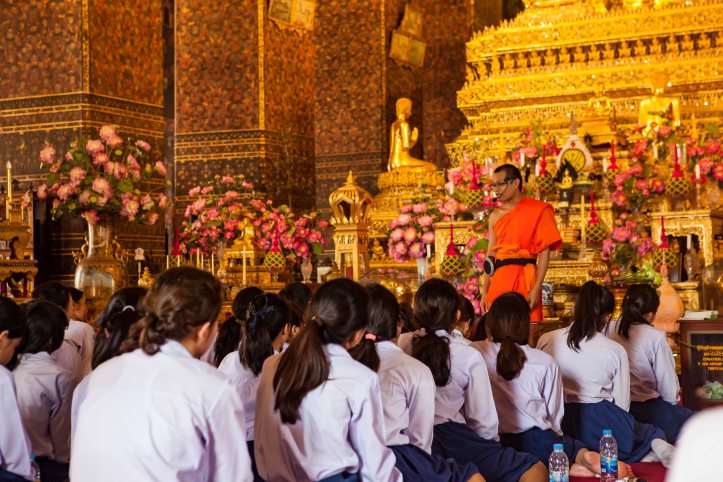