Our overnight bus from Nazca was slow and broke down twice on route to Arequipa.  This wasn’t supposed to be our bus but due to our one breaking down – we had squeezed onto this later one which only left at 2am.  It wasn’t until midday that the bus finally pulled into the Arequipa’s terminus and we were tired after the events of the previous evening as well as the bumpy and restless journey.

We had a hotel recommendation that luckily was only a block away from the bus station so we grabbed our packs and walked.  Indio Dormido (the Sleeping India) was a lovely place run by a friendly couple called Joell and Edwin.  We got a room for s/13 (~£3.5) which even had cable TV!  No guesses as to what we then did for the next couple of hours.

After feeling more refreshed, we got a lift into town and had a wander around the central area.  I thought it was a beautiful with a pleasant atmosphere but unfortunately the famous views of nearby volcano Misti were obscured by heavy cloud.  We found a shop and picked up some bangers and mash for dinner.  The hotel owners let Mark use the kitchen and we ate our dinner watching more cable TV before crashing out for much needed sleep.

Mark feel quite ill today but we weren’t sure whether or not it was his cooking from the night before.  The rest of us were ok so it probably wasn’t the sausages.  Mark stayed in the hotel and Jono chose to keep him company and sleep some more whilst the rest of us headed into town.

We took a long walk to the Santa Catalina monastery.  This was a beautiful mini city within the city which up until earlier this century, was occupied exclusively by a pious order of nuns for over 400 years.  The small houses, cobbled streets and flowery courtyards were all very pretty and well worth the time and money to look around. 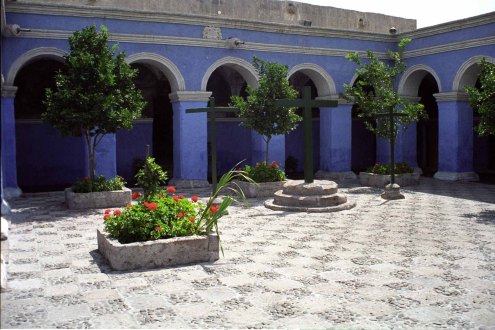 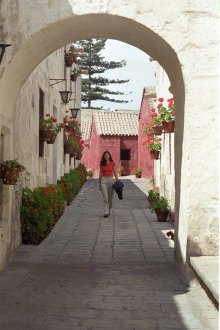 After the monastery, we wandered around town looking at the best ways to visit the Colca Canyon – situated about 100 miles north and one of the deepest canyons in the world.  Unfortunately, it was a long way to go for what would have only been a short stop and we knew we still had to get to Cuzco and complete the Inca trail before it closed over Christmas.  Instead, we thought we’d forget about that and do something completely different.   We arranged with Edwin to go with him the next day on a private mini-bus tour (the advantages of a group of 6!) to visit some other sites around the Arequipa region.

Mark was still feeling quite ill and had been throwing up and had diarrhea all day.  So we relaxed for a while with Mark before the rest of us headed out and grabbed a pizza.  The pizza wasn’t good but we should have learned by now since pizzas in South America haven’t been great in general.  We were due to awake at 3am to start the mini-bus tour so M&D retired early but Irinia, Jono and I decided to finish the night off in a club.   We had got some drinks and bumped into the three girls we had met in Nazca.  So our quick drink turned into more drinking and chatting before all heading home again.  We finally got to sleep at 1am not looking forward to only two hours of sleep!

So two hours later at 3am – we all awoke and were pilled into the mini-bus with Edwin as our driver to head into the ‘badlands’.  Most of us fell asleep immediately leaving poor Edwin to complete the 4 hour drive talking to himself.

I awoke every now and only to find ourselves in the middle of vast desert planes.  At one point in the desert, strange crescent shaped mini sand dunes filled the view.  The did not look natural bot there seemed to be little evidence of them being made by humans.  Aliens again?!  A small sleep later and we were suddenly on the edge of a deep canyon – grey and sandy on the sides but with a lush valley floor filled with crops, houses and a river which must be nourishing it all.

After the remainder of the drive, we arrived in the dusty, barren site of Toro Muerto.  Surrounded by grey cliffs on three sides was a large valley filled with scattered boulders.  On many of these were carvings of people, animals, and depictions of various events.  These strange carvings in the middle of the desert are thought to be dated back to the Wari people around 1000 years ago.  Like so much in Peru from that era, no one knows why they did these carvings here.  They were interesting to wander around and find many different carvings.

Another interesting thing was that the dry, lifeless valley turned out not to be at all lifeless.  Bird and lizard tracks in the sand gave a good clue to the identity of some of the more harmless residents but the air was also thick with bitey mosquitoes.  We drove on.

Edwin drove for another hour and onto Aplao where we visited a small museum.  The area surrounding the small town was filled with paddy fields irrigated by a large local river.  The looks we were all receiving in the town, it was obvious that tourists were not very common around here.  We wandered through the local market but then had to head back to Arequipa since our onward bus to Cuzco was due to leave at 6pm.

Back in the hotel, we washed and changed and said farewells to our lovely hosts and headed to the terminus.  The bus pulled away on its long drive to Cuzco and Irinia and I managed to combine our wits to beat Dad at chess before we relaxed into another well needed sleep.