Today would be a pretty packed itinerary.  Our pow-wow last night as to where to go next and resulted in identifying lots of things we wanted to do and thus to cram them all in.

First on the list was a visit some Inca ruins called Tambo Colarado.  A taxi took us about 50km inland in the heart of a dry and grey desert where we arrived at the site only to find them closed.  The site was a large set of very old buildings made of adobe (a mud-based brick) that were largely still standing but without any roofs all surrounded by 10-foot-high walls.  Not to be put off by the ‘closed’ sign – we walked around the perimeter walls until we managed to find a small gap where we were able to scramble in.

Inside, it was very impressive with many passages, walls and rooms which gave a great sense of how it must have been when it was last used several hundred years ago.  It was originally built by the Wari people as homes and protection.  It was later taken over by the Inca’s who converted it into more of an administration post.  In turn, we spent an hour using it for a great game of hide and seek!

Back in Pisco, we then caught a bus south to Ica which took about 2 hours so it was early afternoon by the time we arrived.  We had come to Ica to try out some sand-surfing but soon discovered that the place to go was actually in nearby Huacachina – a 1920’s style spa village based around a desert oasis.

It took only 15 minutes in a taxi to reach the Huacachina and we were dropped off at a restaurant belonging to a guy called Alejandro who’d been recommended to us by the owners of our San Isidro hotel in Pisco as someone who could rent out some sand-boards.  Alejandro was a funny little man who had the annoying habit of ignoring any of our questions.  When we showed up, he just immediately busied himself getting sand-boards repeating “no problemo!” to anything we asked including trying to determine the price.  Knowing from experience that not agreeing on a price would leave us open to being ripped off – we refused to move until he told us what it would be.  Finally he admitted it would be $10 per person!  This was too expensive and so we negotiated further, and he dropped it down to $6 pp which we accepted.

For the next hour, we spent our time climbing the huge nearby sand-dunes with our boards, whizzing down, wiping out, looking for our lost hats and glasses, wiping sand out of every crevice and repeating the process!  This was great fun but finally we were knackered, and we limped back to the restaurant for a cold shower.

From Huacachina, we all squeezed into a long taxi ride to Nazca since we’d missed the last bus.  We were dropped off in front of a hotel we’d generally headed for and met a guy called Carlos.  Carlos was a very likable Peruvian who said he wold help us find a place to stay with no cost for his services.  Of course, he just happened to own a tour company and he invited us for some complimentary Pisco Sours at his restaurant to talk about the possibility of a short flight over the famous Nazca lines.  We decided to find out own place to stay but agreed to meet him later.  We ended up in a cheap and basic hotel called Mantes and went to claim our Pisco Sours!  We liked Carlos and he offered flights for $30 pp which seemed the going rate.  He showed us a brief video which had some history about the lines and we retired after a long and enjoyable day.

Carlos collected us from our hotel and we drove to a small airstrip on the edge of town.  Small four-seater aeroplanes were coming and going and a few hawkers wandered aimlessly with t-shirts and postcards referencing the nearby famous Nazca lines.

Our flights were booked and since the planes would only seat 2-3 people, we sat outside a nearby hotel waiting for our turns.   In the hotel garden, I was surprised to see an ‘Encounter’ overland travel truck and all its occupants camped out.  Encounter generally pitch their experience as ‘camping in the wilderness’ and we thought that camping in the grounds of a 5* hotel with full use of the hotel amenities may be stretching this!

M&D and I were due to fly first.   Carlos was out captain and he talked us through a bit of an introduction as we taxied up the runway, turned around, came up to speed and took off into the clear morning air.  The ground fell below and the town of Nazca seemed suddenly very small and isolated set alone amongst miles of empty desert in all directions.    Further out, the grey coloured mountains took on an almost fake ‘paper mache’ feel with their barren, wrinkled surfaces.  A vast, flat plain of a dried-up river stretched before us and paler tracks wiggled the sand showing where perhaps the final streams once river flowed.  We crossed a set of low hills and beyond these lay the wide, grey plains of the Nazca Valley.

The valley was several miles long and wide and surrounded by a range of low hills.  All over the valley floor were shapes, lines and scars – none of which were natural.  Many of the lines were just continuous, dead straight markings possibly several hundred meters long, starting and ending no-where in particular (compared to the rest of the plain).  Some lines converged to form large ‘V’ shapes whilst others even travelled straight up and over the hills on the edge of the valley.   From our vantage point at around 200m, they appeared as these lines, yet Carlos shared the lines are actually formed made by piling up the small dark rocks of the desert top soil into mounds along the edges of each ‘line’ which exposes the white soil underneath. 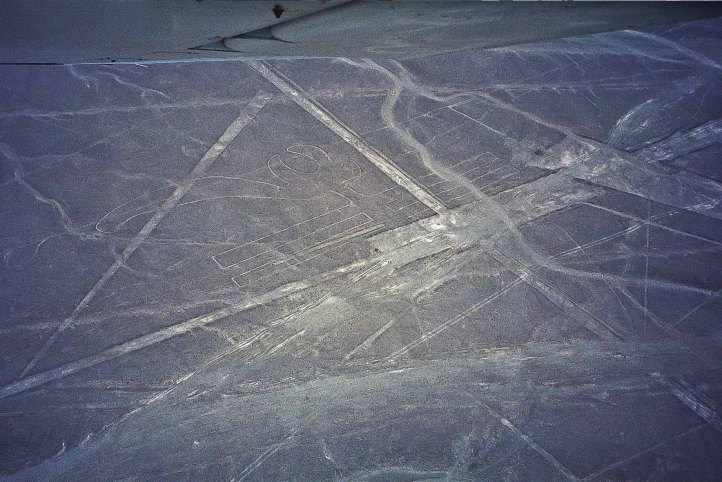 We also flew over several famous Nazca figures – where the lines became intricate shapes, up to about 200m long, which were clearly representations of animals including a monkey, a hummingbird (my favourite), a condor and several others.  There was even one that looked like an astronaut with a thin human figure with what looked like a large circular bowl over their head!

There are many theories about their origin and purpose including: they were made by aliens; offerings to the Gods; an encouragement to animals to stay in this desolate valley; tracks to guide water or find water sources; and many more.  The good thing is that no one knows which means you can come up with your own theory and no one can prove otherwise.  My theory is similar to one other well-known theory – that they are equivalent to our star charts with the figures representing constellations.

After 45 minute and fascinating flight, we returned to the airstrip.  The others finished a short time later and Carlos joined us in the hotel for breakfast.  By this time, we had become quite friendly with Carlos and he mentioned that three girls from the Encounter truck had booked a tour that afternoon with him.  He kindly suggested that the cost was already covered – we could tag along for free!

The three girls were friendly, and we headed off in a small minibus.  They were on a gap year and one of the girls had recently been in a bus crash badly injuring her face.  The driver had fallen asleep and the bus had flipped onto its side but she bravely carrying on with her travels.

Our first stop was to an old gold mine extraction site.  We learned how the miners came to extract gold by using mixing the silt with mercury, using silk filters to separate the dirt, and then evaporating the mercury to leave the gold.  Or something like that.  It seemed a hard life for the pittance they earned from this process.

Our next stop was a pottery guild where the owner showed us how the Nazcans (who are also famous for their pottery) made and painted some delicate looking pots.  The best came last however when we headed out to an ancient cemetery in the middle of the desert.  There were a number of graves that had been dug up to reveal mummified remains of its incumbent – largely preserved from the extreme dryness of the desert sand – sitting in the upright foetal positions in which they were originally buried.  Several mummies still had skin, hair and clothes altogether giving them a rather horrific appearance!  We walked amongst the open graves debating whether this was ethical or not – but it was interesting never the less. 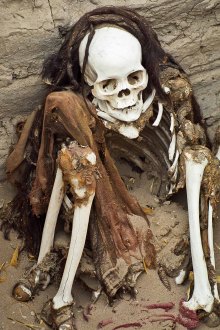 After a final dinner in Carlos’ restaurant, we around for the overnight bus to Arequipa to arrive.  It never arrived having apparently broken down somewhere up route.  We waited until 2am and luckily managed to squeeze into some spare seats on another bus heading the same way.  I fell asleep squashed against a rather fat woman as we slowly headed further south.