It was my turn to arrange a surprise for today and I knew I wanted to take Rach to see the beautiful Phang-Nga bay area.  A car took us to back to a port on Phuket island where we transferred onto a ferry boat with a number of other people who had come from other places.  We put on our life jackets, found some seats and the boat headed off into Phang-Nga bay.

Phang-Nga bay is the name given to the stretch of water between the island of Phuket and Krabi on the mainland of Thailand.  It is full of islands made mostly from limestone heavily eroded by the sea to form their steep sides with caves and undercuts at the waters edge.  The islands are mostly uninhabited and covered in trees and wildlife and so are great to explore by boat. 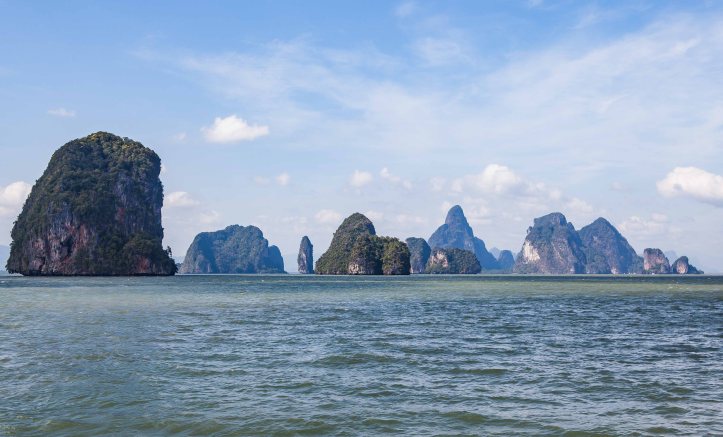 After about an hour’s ride, the boat moored up in a small bay of one of the larger islands.  Here the boat-hands unloaded some inflatable kayaks and we all split into pairs (Rach and me of course!) to go exploring with a guide.

We paddled  right up close to the tall cliffs and tucked in underneath them where the waters were eroding the cliffs from the bottom up!  The erosion had caused stalagmite like formations coming down from the overhanging rocks and small caves could be seen digging deeper into the rocks faces. 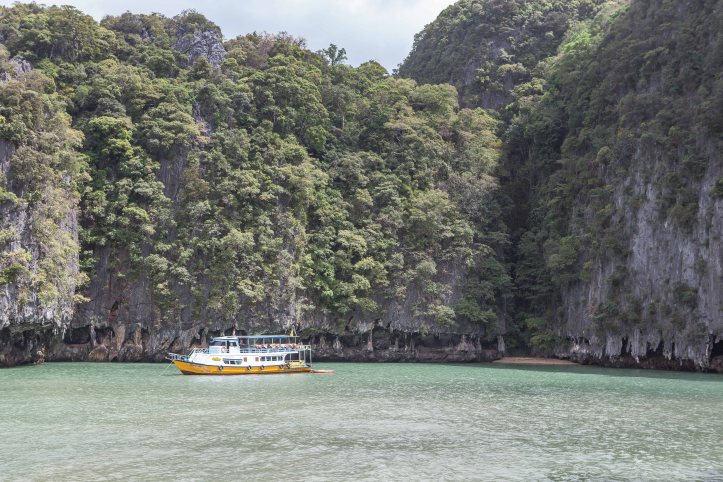 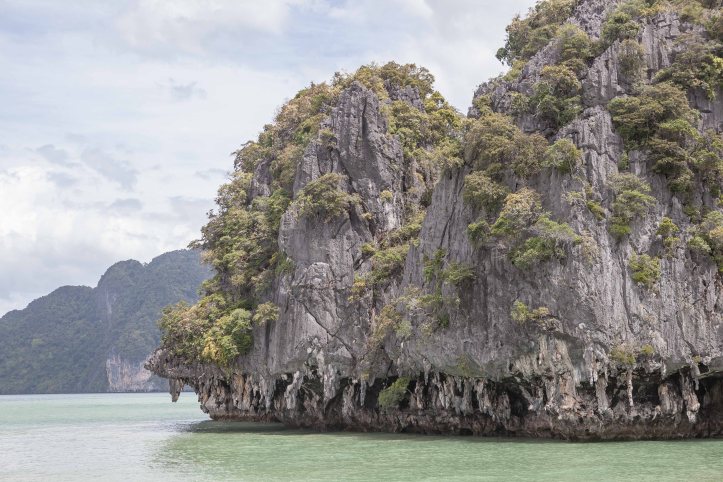 One of the caves was large enough for us to pass through quite comfortably into the islands interior where there was a large protected lagoon.  Here, the island rose all around us on all sides and small beaches provided access to the dense jungle.  Our guide kept paddling through the twisting waters until passing through another large cave on the far side where we were able to reach the open sea once again. 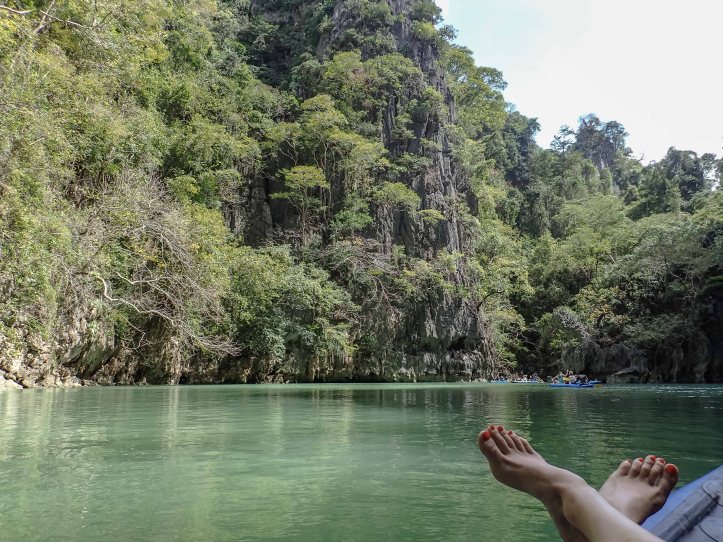 Further on was another cave but this one was a very tight fit!  We had to lie as flat as we could in the boat and in the darkness, I could touch the rocky ceiling as it passed just inches over our heads.  The guide pulled the boat along using the rocks until the cave opened up into a large cavern.  Here many bats lined the ceiling and didn’t seem to bothered by us floating beneath them.  We carried on and squeezed out through another very low part of the cave into another internal lagoon. 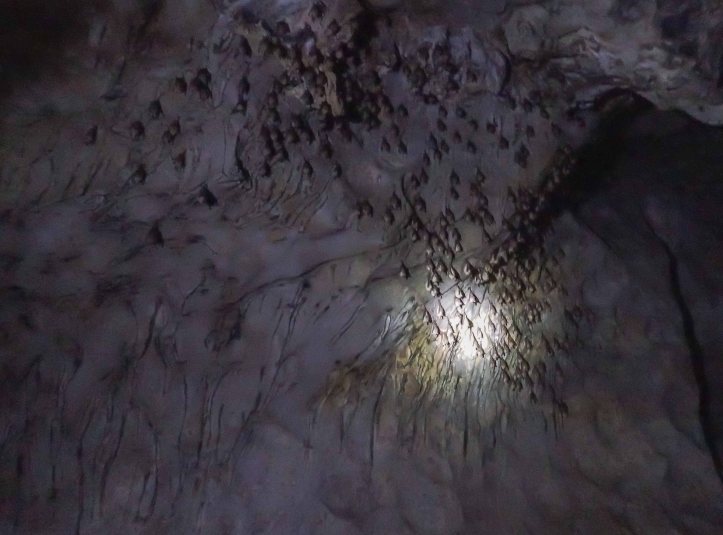 After an hour or so of exploring the caves and lagoons, we headed back to the boat.  We had some free time so Rach and I took the kayak and headed off to the nearby beach.  Here there were several monkeys looking for food and seemed quite used to humans.  The one below even sat quite happily on our boat all the time we were on the beach only moving when we started dragging our kayak back into the water to return. 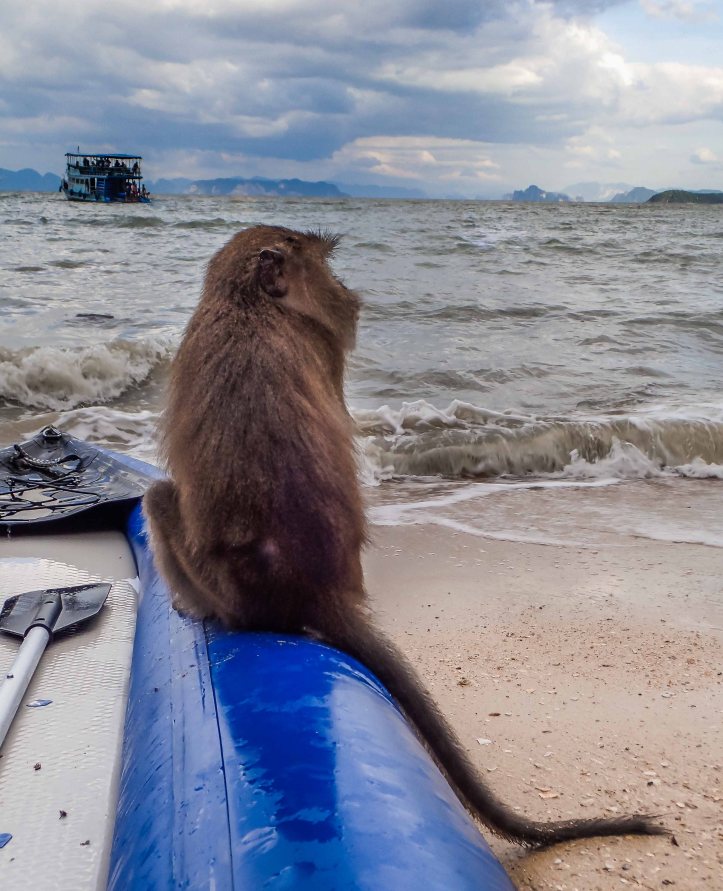 Once everyone was back on the ferry, it continued onwards to the well known ‘James Bond’ island made famous by the film ‘The Man with the Golden Gun’.  It was one of my favourite Bond films and quite fun to see the very family rocky islands – albeit without lazer beams or scantily clad girls!  We didn’t stop long but I didn’t mind since the beach area was full of tourists and we wouldn’t be able to see much more from the beach than we could from the boat!

As the ferry turned south and headed back to port, the sun began to sink lower on the horizon.  The beautiful golden rays reflected on the bay and silhouetted the islands beautifully.  Rach and I had found a nice little spot at the back of the boat to enjoy the lovely evening. 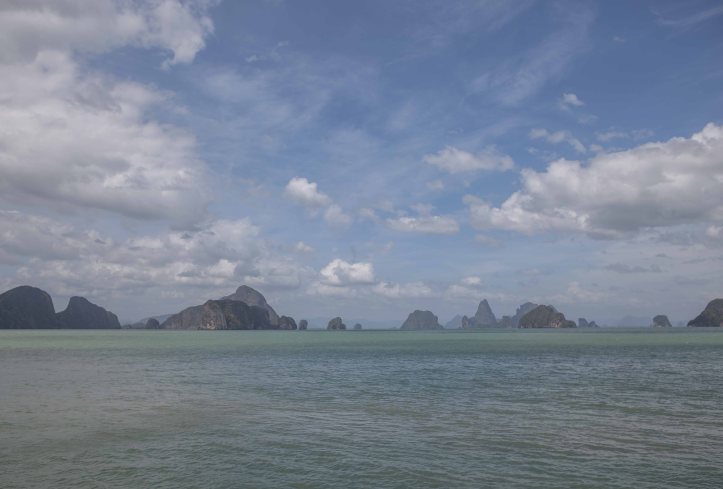 We got back to port where our car was waiting to take us back to the Sarojin.  I’m not sure Rach was completely thrilled about all the day’s aspects – especially the tiny caves filled with bats but the bay itself was very beautiful.