The Langdales in the Lake District

To celebrate our engagement, we came up to the Lake District to enjoy a few days together.

We awoke early to set out on the 6 hour journey from London and by 11am, we arrived in the pretty village of Hawkshead having crossed Lake Windermere via the ferry.  We were staying at the Sun Inn which was a good base for the walks we wanted to do around here.

As it was Rach’s first time doing any hill walking – we dropped into the shop walking opposite to get a few bits before than driving out to Langdale for a little afternoon walk.

We parked up near the New Dungeon Gill Hotel and walked up to Stickle Tarn which has lovely views back across the Langdale Valley.  It was already getting late so we didn’t go too far – but it was nice just to stretch the legs after being in the car so long.

The cloud was low in the morning so we decided upon a walk through the nearby Grizedale forest.  After a coffee in Poppy Red, we set out alongside the church, made our way out through the back gate of the grounds and cut across a short path onto the road.

We followed the road for a while slowly heading uphill until we reached the car park that marked the entrance to the Grizedale Forest.   The gravel paths in the forest would make good bike riding but they were slightly monotonous to walk through with few views between the trees.  Eventually, we took the chance to cut out of the forest and into a small grassy valley which was much prettier.  Our made up path led us over a small stream and through an arch of trees into more fields before we climbed over a fence to get to a small car park area for a mid day break.

From here, we turned towards into the pretty village of Hawkshead Hill and our path made its way across more fields back to Hawkshead itself.

The weather cleared up in the afternoon and we headed off towards Skelwith Bridge for another walk.    This walk was much prettier, following pretty rivers and valleys with great views all around.

We started with a coffee in Chester’s mainly to borrow their car park and then we set out on the path towards Colwith Force waterfall.  On the way, we met two very lost Americans and were able to help them with directions to get back to where they were going.  Near the waterfall was a tree embedded with coins and we climbed down to the rocky river to relax.

The path continued up past High Park Farm and we cut across the valley to Little Langdale and then on to Elterwater.  From here, we turned right to follow the path down towards the lake and it was beautiful in the setting sun.  It was 7pm by the time we made our way through the yard of a slate company and back to our car feeling very satisfied. 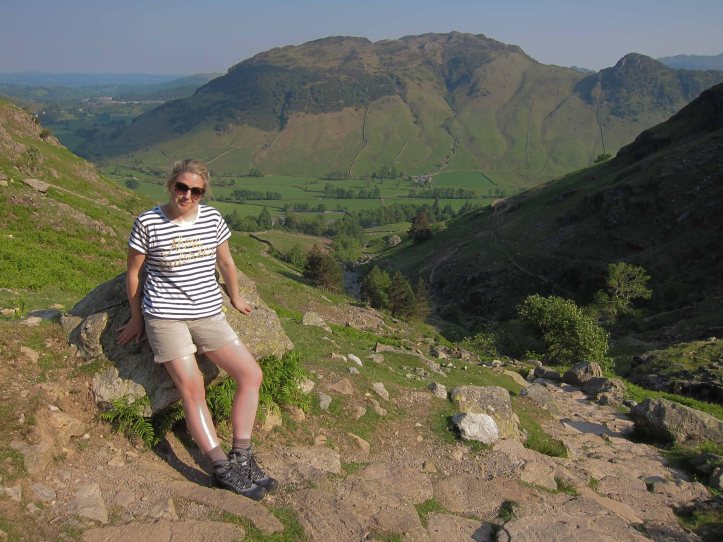 We wanted to challenge ourselves a bit further today but the weather was unpredictable.  Our first step was to get up to Angle Tarn in the Landale Valley and from here we could decide what to do next depending on the weather.

Luckily we were able to park in the last of the free bays in between the Old and New Dungeon Gill Hotels and we set out along the long walk into the valley of Mickenden.  The weather was dry so we made our way up Rossett Gill and finally reached Angle Tarn after a tough walk.  It was cold but lunch at the tarn was very enjoyable and I revealed a secret bottle of Champagne I had carried to celebrate our engagement.

With the clouds not lifting, we opted for the slightly lower walk back around the Langdale Pikes.  We continued along a comfortable valley walk above Rossett Gill towards Black Craggs but this then turned into a heavy trudge across Martcrag Moor until we reached the pile of stones known as Pike of Stile.  Feeling our day was not over, we continued up Harrison Stickle and then onto Pavey Ark which afforded wonderful views across the valley to Windermere.

The descent was tough going but we made it down to Stickle Tarn and then the easy stone path back down to the car.  By now our legs were feeling very tired but it wa a thoroughly enjoyable walk.