Trip into the Bolivian Jungle

The ongoing diary entries from our year-long tour of South America.  Our group consists of myself, my brother Mark and our good friends Jono and Irinia.

The alarm went off at 7am and it took a while for me to buck up the desire to get back in the cold-water shower.  Today however, the pressure was up and it was great (for a cold shower!).  We squeezed in a quick breakfast before heading off to the the tour office and off to the river.  The river Beni is wide and fast but with its powerful engine and light cargo, our narrow boat skimmed upstream.  There were eight people on the tour: two Dutch, a Norwegian, a Swede and the four of us.

The area we passed through was quite different from the flat savannas we’d grown accustomed to over the last few days as there were numerous hills, mountainous, rocky ridges with cliffs on one side and gentle slopes on the other.  The river wound between great forested mounds and deeper into the thickening jungle.  We looked out for wildlife and were rewarded with a large bird of prey and a colourful heron-like bird.

For three hours, the boat motored and finally pulled into a small side river where we moored a hundred yards further up.  It was a five-minute walk to the camp which consisted of a large netted hut where we could all sleep and some amenities for cooking etc.  The jungle was all around with trees reaching to the sky followed by dense bushes.  I was surprised by the lack of colour as there were only shades of green.  The noise of insects and birds was all around but I could see none of the latter and too many of the former!  I had expected lots of birds such as parrots for example.

While we unpacked our small bags, the sweat as a result of the high humidity began to trickle down my back.  Outside the protection of the hut, flies and other flying nasties wouldn’t relent in their pestering and inside the hut, it was a even hotter than outside.  We were served a simple lunch and then we set off for a jungle exploration.  Divided into two groups, we had a guide between the four of us but only 10 yards into the thick jungle, I felt completely lost!  Our local Indian guide spoke no English but a combination of our limited Spanish and jungle charades meant we didn’t miss much.

Our guide showed us various fruits which we tasted and various plants which are used in medicine.  My favourites included: a ‘garlic tree’ – the bark oozing a garlicky liquid when broken that we rubbed this into our skin to help keep insects at bay; the cacao tree from which chocolate is made from the seeds of the yellow fruits; vines which produce quinine used as a malarial cure; the milk tree; and the glue tree.  There was so many I ended up thinking there was a tree, plant or animal that could help with all our day to day needs!  We didn’t see many animals and only a few pig tracks to even suggest any were nearby.  Insects were plentiful however and we found out about the tree termites, fire ants, devil ants, giant poisonous caterpillars, scorpion beetles, and even a rather unexpected encounter with an angry nest of fire wasps!

At mid-way, we practiced our Tarzan impressions with some vine swinging and climbing a nearby hill, our hot toils were rewarded with a glorious view across the Rio Beni and into the distant horizon.  By the time we returned, we were dripping wet and flies had found their way into the unlikeliest of places!  Our dinner was a pasta and fish mix which filled a gap before I retired for a hot attempt at sleeping.

Since I went to bed the previous evening quite early, I awoke up naturally some time in the middle of the night.  It was raining and from the look of the ground outside, evidently it had done so for a long time.  The sounds of the jungle at night were more plentiful than during the day.  There were the familiar twitters, screeches, cries, raspings etc but every now and then, there were new sounds not familiar at all and slightly worrying cause of that.  I listened until I fell back to sleep and rested until morning.

Breakfast was good and we were ready for another walk.  It was a similar walk to yesterday except our guide didn’t really stop much with explanations or to point anything out.  Between the rest of us, we found some interesting bits and pieces including more frogs, moths, butterflies, very large snails and 6 inch long stick insects.  Irinia and I managed to walk through the branches of an ‘ant tree’ getting immediately covered in the angry insects in the process!  It took ages to pull them all off and not before many of them had given us a nasty nip.

Not long after the ant tree debacle, through the trees came a strange howling sound like a strong wind but in non continuous bursts.  We made a path towards the source and it got louder and louder until it filled the air around us.  Suddenly there was lots of rustling in the trees above and several howler monkeys appeared.  They were rusty red and varied in size from cat-sized to about twice that.  The howling stopped and they peered down at us with curious faces before suddenly all breaking out barking like dogs and making another sound like a large push saw.  We stayed still and studied them for several minutes before making our way back the way he had come.  A little further on, we heard the cry of what our guide called a ‘cappuccino monkey’ but we never actually saw one.

For the next two hours, we didn’t see a great deal but it was quite fun to push through the dense undergrowth, ever in anticipation of what may lie behind the next tree.  The other group were jealous when they heard about the howler monkeys but we all knew there was plenty of time yet for more discoveries. 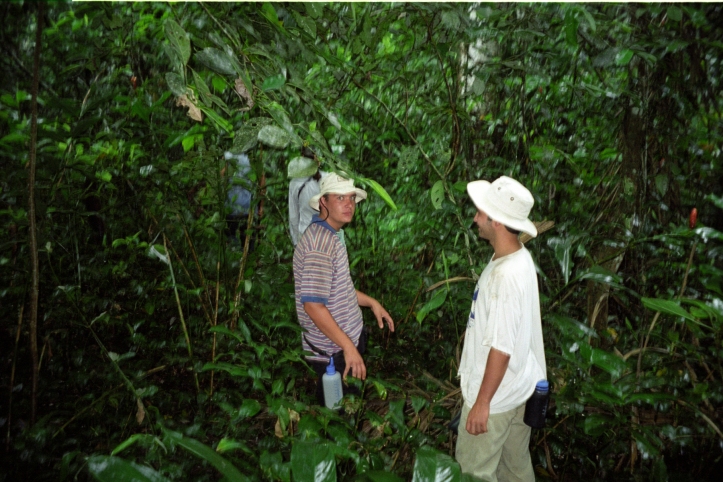 A roast chicken lunch diverted our attention and then it was time to move to another camp.  We waited for the boat to come and pick us up but by 3pm, it still hadn’t appeared so it looked like we’d be spending another night in this camp. So instead, our guide had suggested some fishing so we headed off to a spot about an hour and a half away.  I knew it required a lot of river wading so I was wore sandals and long trousers in a lazy attempt to get them clean!   With water up to our thighs, we were soon soaked through.  When we weren’t river wading, we were climbing up muddy slopes.  The wet mud made us slip all over the place and as we were only wearing sandals, we were soon covered head in mud as well.  The fishing spot was just a place in the river where it was a bit wider but within a minute, the guide had caught a small catfish.  I also pulled one out a few minutes later but the rest of the fishing was restricted to just the occasional nibble.  We threw them back since they were too small to eat.  We stayed just twenty minutes as we had to return so it seemed a bit pointless having spent all the time getting here but it was going to get dark soon and the walk itself was quite interesting.

Back in camp, we had dinner and then set out for a night walk.  It was quiet and spooky at night because you could only see what the torch showed and everything else was left to the imagination!  There were many more creepy crawlies but we couldn’t find any tarantulas which was our main aim.  We did however manage to catch what our guide called ‘the most dangerous snake in the Amazon’ but I can’t remember what he called it and anyway, it didn’t look very scary.  We caught it with sticks which was funny because whilst trying to get close, it would keep going for one of us and we would have to run away.  The other group found a lot more but the night walk was still good fun for a while.  In camp, someone produced a bottle of Ballantine’s whisky which kept us all happy until the small hours!

After breakfast, we headed off back into the jungle.  My clothes were still wet and gritty from the previous few days but I saw little point putting on anything clean when the chances were I’d be just as wet within the first hour!  As it turned out, this was to be the case sooner than I expected since I slipped and fell into a river and then got covered in more mud trying to climb up the steep bank.

We walked for a long time over tough terrain but didn’t see anything of note.  At one point we heard the sound of what our guide said were Eagles eating spider monkeys although I thought his hearing must be very good to pin point that.  After a couple more hours, we came to a view point at the top of a hill.  The view was amazing across the plains of the River Beni towards the hills in the far distance.

The route back was different but mainly down steep muddy slopes made worse by the torrential rain that had begun to fall.  Mark, Jono, Irinia and I spent most of the journey skiing down the slopes and jumping from the vines that hung overhead.  The other group tried to take it more slowly but they ended up sliding down on their arses.  It took over 5 hours to complete the round trip and finally we were back at camp for the final meal before we’d head back to Rurre.

On the light skiff that took us back, I slept most of the way in a day dreamy state.  Three hours of river later, we pulled into Rurre.  We booked back into the Hotel Touiche and immediately set out for the Social Club for a drink.  A drink ended up being a big cheeseburger with fries and several beers on the side.  Our guides turned up as well and we bought them some drinks whilst chatting about all sorts.  One item of interest was when we were talking about Anacondas.  Our guide said they typically live up to 200 or 300 years old but are thought to possibly live until 1000 years.  He also said there are many Anacondas about 20 meters in length but he’s heard of them getting as big as 50 meters (and about 3-4 feet round).  They have sunk wooden boats by rising up underneath them and then attacking the passengers.  He also showed us where a crocodile had bitten him.  He said Black Cayman often reach 10 meters in length.  After we ran out of money and the guides out of tall tales, we headed back for an undisturbed and much more comfortable night’s sleep.

All in all, I really enjoyed the jungle trip but was disappointed not to see more animals.  The jungle was quite different to expectations as it was more like a normal forest but wetter.  It was fun just to get some exercise though!